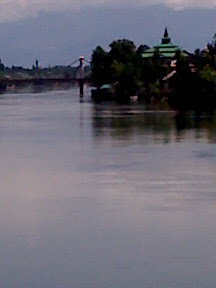 Mile stone reads SPORE 0 km, this is the square which you might have been imagining to be Trafalgar square of the LITTLE LONDON. But when you raise your gaze from the mile stone up, above and around what do you find, GRAVES and graves every where around you. This is one more surprise that this town gives to every body. Despite being so much business oriented in the past (desperately trying to continue so…) this town has at its heart DEATH. i never understood why the forefathers of this town chose the centre of the town for the grave yard….!

No denying the fact that this town has seen some of the most beautiful times but it also has past through some of the grimmest times as well. But these things have not dented the spirits of the inhabitants . They have been coming up conquering every adversary despite all odds. This is the reason that the inhabitants have earned themselves titles like "THE BRAVE HEARTS" , "THE SPIRITS THAT CAN'T BE BROKEN" ,"REBELS" and many more.

At some time in the past "The WULAR" devour one hundred people at a time………. The whole town drowned in grief, at that time the town was very small as compared to now, when it has become the largest town of the state and still its growth has not shown any signs of seizure . This was not the only time when a calamity of this enormity struck the people of this town. The calamities continued to come at regular intervals and tried to dent the spirits of people, cease the smile of the ever smiling people,b e it in the form of earthquake or fires, but up till now it has never succeeded.

6th of January 1993 was one such fate full days when death would again pay a mass visit to this town. The chilled morning began in the usual way, with the silence of winter being broken by the murmuring sound of the people walking on the frosted snow. no one new that this day would change lives for every single person of this town , it would change the meaning of 6th of January. On this fate full day , the main market (business hub) of this town was burnt, damages ran into cores of rupees . There are families who have not yet recovered from the financial loses incurred during that fire. There were some loses which nobody would be able to recover from , ever…….. The loss of near and dear ones , loss of family members, some even lost their CHILDHOOD !...... I wont go in to the details about how this happened but I would like somebody else to do the talking, who is more credible than me , THE TIME magazine( http://www.time.com/time/magazine/article/0,9171,977469,00.html ). On that fateful day there was not a single family which was not effected, who had not lost somebody or was not injured. This inhuman incident brought the whole town together , with out fearing for their own lives they came for rescue of the injured , retrieved the bodies of the dead from the burning rubble, where even the professionals would have hesitated to go and above all came together to console each other.

I was I kid of 7 years then. On that day like all, my father had also left home for office, my father's office was situated on the outskirts of the town and we used to live on the other periphery, me and my mom were enjoying our winter holidays at home. By evening our joy had changed into concern. After the fire the whole town had come to a stand still there was no public or private transportation. There were no means of commuting , a person in one corner of the town had no means to reach the other periphery. My father didn't come home that night, till the next morning concern became graver and my mom became restless. During those days there were no mobile phones and the landline telephones were very rare to find and if one was lucky enough to find one during winter he still needed all gods favor to find it in working condition . Till evening there was no news of my father, then suddenly my mom came and told me that a truck had come into the locality just check it out. When I reached at the spot where the truck was parked I found that it was carrying the dead bodies of the people from our locality (which had been identified form the identity cards they were carrying) . I remained near the truck till it moved on. When I returned mom was waiting at the gate , she inquired who's dead bodies were they ……………… the night was coming fast and still we were without any information . The whole night my mom was awake hoping for somebody to come and give us any information. Next day at around noon a person came and informed us that dad had called up and he was fine, no need to worry. Finally the torture was over……………. But still I couldn't figure out why mom sent me to check the truck that had come to our locality when she knew what horror it was holding. I do not have the courage to ask my mom so think I may never figure it out .

Recently one more tragedy paid its visit to this town. A boat carrying 40 children capsized in the WULAR killing all the children and their teacher. The children were of the age group 5-11.what was disturbing was they were in a navy boat and navy base is at the bank of the lake, about who was responsible and how it happened i don't want to go in details , you can research yourself (depends were from you research....)


I think I have found why the forefathers chose the center of the town as grave ward. This is their way of staring straight at the death and telling it that it can't bend us , it can't break our spirits, we will continue to rise from the rubble to reach for the stars….. On the other hand they wanted us to remember all the time that nothing is permanent in this world and one's success in this world should not get to his head, as finally all have to sleep under the earth………………….