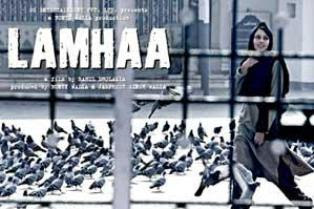 Now days i am quit bussy trying doing nothing, so here i am reposting the movie review by Mr. Masook A Dar. Hope everybody is fine and busy with their lives .... wishing you best of everything. so now i leave you with LAMHA and till next time take care :)


LAMHAA IS NEITHER A PRO KASHMIR FILM, NOR AN ANTI INDIA FILM, REVIEWS MASROOK A DAR


Is Kashmir all about money? Do Kashmiri schools train their students to turn into Lashkar? Are innocent children used as human bombs in Kashmir? Have sex scandals to do anything with pro freedom groups? Are women used as Human shields in Kashmir? Is every pro-freedom group corrupt in Kashmir? And every pro-Indian group the messiah, these are the question that one has, when one comes out of the movie theater. Is this true or not can be a debate, but for Rahul Dholakia there is no such debate as his film ‘Lamhaa’ attributes all these things to this section of Kashmiri society.

In 2008 upsurge (Ragdaa – as was the name given by local Kashmiris), National Award winning director Rahul Dholakias' film came in news flashes. Since then millions of people like me have been waiting for the movie to release. The movie came into news and made headlines in June 2010 when Dholakia took the movie to Sri Lankan International Film Festival. The Government of India and the Censor board had some reservation in promoting the movie at International film Festival (Srilanka), But Dholakia and his crew stood firm and took the movie to Srilanka.

Rahul Dholakia in one of his statements said that, "'Lamha' is different from other films made on the plight of Kashmiris. This film is not from the point of view of the government or the politicians, it is from the point of view of the people of Kashmir," and even stated further that, "We faced no problems in Kashmir. Omar (Abdullah), the chief minister of Jammu and Kashmir is my friend and he provided us with full security. Also there was full support from the people."

It has been two years since I like million others were waiting for the movie to release. Finally, it was 16th of July 2010 when the veil was lifted and the wait was put to an end. Eager to see the movie I woke up early as I had to fetch the tickets, at the back of my mind I had the apprehension that the movie is from the Award winning director who has the credit of directing the much appreciated movie ‘Parzania’. When I reached the theater I found quiet a handful of guys waiting for the movie to start. I went straight away to the ticket counter and asked the guy if he could give me a better seat to sit. I was surprised by his statement, “sit wherever you want,” as a small crowd was turning to watch the much media hyped movie.

Lamhaa is about the highest militarized zone and conflict hit region Kashmir. The movie opens in 2009 and tells all about what was the condition in 1989 when the Natives of Kashmir turned refugee in their own country. Contrary to other movies based on Kashmir, in which Pakistan is depicted as villain (promoting insurgency and destabilizing not only the region but whole India) and India as hero (upholding its democratic principles and fighting for the noble cause), Lamhaa takes a middle route. Lamhaa ridicules all political leadership (across the borders), Military agencies, corrupt Businessmen, and Militant and Moderate factions. We are shown the miseries of Kashmiri people – Muslims and Pundits at surface level. Although the migration of Hindus from Kashmiri and the disappearances of Kashmiri Muslims at the hands of security agencies has nothing to do with the plot of the movie still it forms the essential part of the movie. It also shows us Dardpora village of Northern Kashmir where a large chunk of the women are half widows.

Vikram (Sanjay Dutt) is sent as an undercover agent, the parallels can be taken from any James Bond movie, on a high profile secret mission to Kashmir when the Indian intelligence gets information of a probable big terror attack in the valley. Separatist leader Haji (Anupam Kher) has been fighting against the Indian government since 1989 for freedom of Kashmir. Aziza (Bipasha Basu) supports her mentor (Haji) in his mission and Aatif (Kunal Kapoor), who is now a reformed militant, wants to contest elections from the valley to win his people and province.

Like in any conventional Hindi movie, for the protagonist Vikram, his job seems to be a child’s play. Vikram easily sneaks into much guarded police commissioner’s office in broad daylight and has easy access to all the information. He in no time finds a local tailor who has all the information about Kashmir- from politicians to intelligence agencies to separatists. Vikram, like any hero can easily convenience any body be it Peer Baba (Mahesh Majrekar) or Aziza (Bipasha Basu) and in this way he comes close to Aziza in unearthing the plot.

One finds it a little difficult to absorb the diverse characters and their ideologies. When the movie finishes the first thought which gets ones attention is do I know all the characters of the movie? The movie has overall got a good story and good star cast but really what matters is silence and slowness of the movie, which downgrades the quality of the subject. Though the movie attempts to touch several concerns like half widows of Dardpura village, sex scandals in which politicians are involved, disappearances of thousands of Kashmiri people and psychosis of Security forces (A reference in which one solider says that he has to work for mere 7000 bucks in such a difficult region). But these concerns are peripherally touched and are not a part of core narrative. Besides the picturesque land scape of Kashmir which is shown through the lens of Jamie Fowlds camera, there seems no editing work done in the movie as the camera movements from one seen to another annoys the audience however the background music is reasonably good. The next part of this review will be the interpretation of Lamhaa as an insider.

Looking at Lamhaa as an insider, I found a shift from the traditional Bollywood movies based on Kashmir. Lamhaa is neither a pro Kashmir film, nor an anti India film. It actually becomes difficult for the audience to place the movie on the conventional platform of either being pro or anti to something. Dholakia and his co-stars in all their interviews where of the view that the film reflects the feelings of common Kashmiri, which for me as a Kashmiri was hard to digest. If I had to sum-up it in one phrase I would borrow the phrase from Lamhaa itself - 'Beautiful Bollywood Drama'. The main problem of the movie is looking at the subject matter superficially as a layman. One can’t account financial transactions to every account of what is happening in Kashmir. Dholakias’ analysis of Kashmir problem seems to be political gimmick and financial transactions to which every organization as well as local people are a party, sidelining the sentiments and aspirations of Kashmiris. The movie in a way does not give weight to the political dispute of Kashmir and instead mocks at it. For Dholakia it is all about money, as he uses the word 'company' quiet a few times in the movie. It looks as if no intellectual thought is put in the movie; rather it looks some nationalist Indian in narrating the story from the heights of Surat (a city in Gujrat).

Being a Kashmir one can easily relate Haji and his associates to Veteran Kashmiri separatist leader Syed Ali Shah Geelani and APHC respectively. Dholakia’s movie is no different from other Indian movies in a sense that all Kashmiri separatists are not true representatives of Kashmir. It shows them as professional moneymakers, which a large chunk of Kashmir population and Diaspora will disagree. Haji is shown as a schoolteacher who exploits his students and shows them the path of ‘violence’. The film portrays Kashmiri separatists and militants exploiting not only these innocent children but also women. The movie shows small children being used as human bombs and women folk as the torchbearers of Kashmiri freedom struggle. In a scene where Aziza is humiliated by a number of Kashmiri women wearing green bands on their forehead and veiled in black dresses, it does not take a minute for a Kashmiri to relate these women with Dukhtarani Millat. As I said earlier there is a scene where sex scandal, which made to news headlines in Kashmir is shown. But in the movie it is Aziza, a pro Kashmiri women leader who exposes the scandal. Vikram again comes to the scene where he gives proof to Aziza that it has links to Haji – Kashmiri separatists. An ordinary Kashmir will feel the pain the way Dholakia portrays him. It is a direct attack on Kashmiri sentiments and the concept of Kashmiryat.

It would not be unfair if I use dholakia’s phrase ‘Company’ here and argue that Kashmir is a big company for Bollywood. Film directors now and then come up with movies on Kashmir and try to do some sort of poetic justice with the sentiments of Kashmiris. But the truth is it is a company where they can earn not only name but also fame by playing with the sentiments of Kashmiri people.

A large part of the movie focuses on the conflict within the separatists; there is a section of them, which boycotts elections, and the other section, which are of the opinion that elections are the solution to the problem. One can find the references to the times before 80’s when Sheikh family came in favor of elections and some of Kashmir’s prominent leaders distanced themselves from the electoral process. Although the timeline Dholakia gives is present but relating it with past becomes more obvious. The movie ends up with young Kashmir leader (Aatif) wining the minds of people and eventually elections. It becomes difficult to understand whether Dholakia is of the opinion that electoral process is the solution of the problem or justifying pro-Indian political leaders as the messiah of Kashmir.

(Masrook A Dar is Research Scholar at EFL University, Hyderabad. Feedback at masrook@gmail.com)
Posted by AL-HAQU MURUN at 11:27 AM